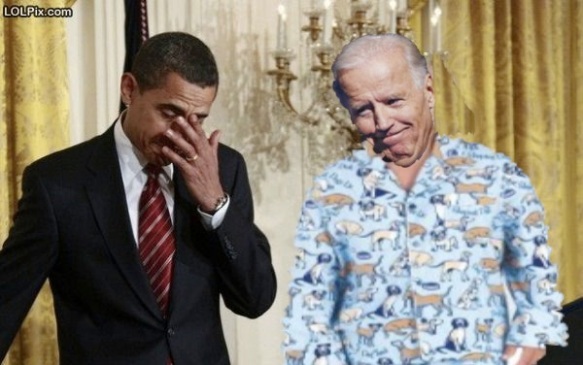 Washington–Joe Biden showed up at the White House yesterday in his pajamas, carrying a tattered blanket wrapped around a well-loved teddy bear his grandmother had given him. Obama was said by aides to be completely puzzled by the Vice-President’s wardrobe. According to White House aide Alice Rigsdale, Biden was eager for the  upcoming sequestration. Obama shook his head and asked, “Have you been watching Law and Order re-runs again?” Biden nodded vigorously, and asked, “So, can we stay at the Hay-Adams or are we going out to the Greenbriar?” Clearly agitated, Obama left the room muttering, “The things I do for George Soros.” Several Vice-Presidential aides had to brief Biden on the difference between jury sequestration and the upcoming fiscal issues facing the U.S. government. “So we don’t get to rent dirty movies on Pay-Per-View,” a puzzled Biden asked.

It is pretty much a given fact that cheating in any relationship will hasten its death quicker than forgetting Valentine’s Day. Money and incompatibility are right up there as the grim reapers of marriages. The five most common pieces of advice to maintain a relationship are: communication, understanding, affection, shared values, and respect.

Oddly, there is no mention of honesty.

As politicians court us, trying to build as personal relationship as they can with millions of people at once, I wonder if we want our politicians to be honest, or do we just want to hear soundbites and snippets of sweet-nothings? Probably not. And how do we react when there is a moment of unscripted candor?

forthcoming episode on the rumor that there was a moment of political candor in Iowa or North Dakota. I can see it now, Josh in his near Kermit the Frog voice saying, “Tonight on Destination Truth, we explore the rare Malaysian goat monster known for eating fish on bamboo pikes, and after that, the Truth team heads to Iowa where, reportedly, a politician owned up to their words and spoke the truth.”

As candidate, Romney has more leeway in his ability to serve up a few gems of candor. In one breath he can tell us about the Malaysian goat monster destroying our economy and then slip in a moment of truth, like he did when he said, “Let Detroit go bankrupt.” Romney also has the ability to place the burden of candor square on the man in office. He could do this in a myriad of ways–I’d advice his campaign to for Obama to be honest about his record in office. Right now, it would appear that Romney’s candor attacks are focused around his off-the-cuff comments to Russian President Medvedev.

And candor can also do more harm than good. The Coalition of Black Ministers has called Obama on the carpet for his new stance on same-sex marriage. It wasn’t Obama’s candor that could cost the President a portion of the Black vote, but rather his Vice-President’s. Obama should have known better than to expect Biden to keep his mouth shut. In 2008, Biden’s candor reached epic proportions when he admitted, “Hillary Clinton is as qualified, or more qualified than I am to be vice president of the United States of America. … And quite frankly, it might have been a better pick than me.” Looking back at the same-sex marriage rankle in the Obama White House, may she would have been a better pick.

Romney isn’t off the hook, either. Despite his calling for candor from the President, Romney got himself in a bind with the voters on his recent trip through Europe. As an “expert” on running an Olympics, Brian Williams asked Romney about his views of the games. Romney’s honest response: “There are a few things that were disconcerting, the stories about the private security firm not having enough people, supposed strike of the immigration and customs officials, that obviously is not something which is encouraging.” It is a good thing that the people of London can’t vote.

As the election nears, we can continue to expect truths wrapped in enigmas. We will hear about the hard decision the candidates will have to make if they are elected, but we will have to infer what those will be. Like the Biden same-sex issue has started a small fire in the Obama campaign, I know that no candidate wants to throw themselves under the campaign bus based on a slip of the tongue. Yet, there needs to be more substance, candor, to the words mouthed from these men between now and November.

Until then, I’ll be watching Josh Gates. Maybe he’ll find the truths.

You can view some of my published work here: bryandumas.wordpress.com

The material on these pages may not be used without written permission of the author. No unauthorized use, duplication, or reblogging is permitted. Links to the site and its written material may be embedded elsewhere provided that full and clear credit is given to Bryan Dumas and Fair To Middling.