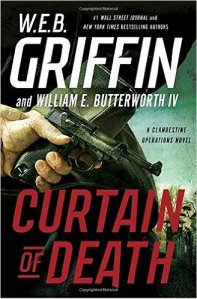 In this 3rd installment of the Clandestine Operation series, James Cronley, the Director of Central Intelligence Europe, has a new problem. One of his WACs—Claudette Colbert, no, not the actress—shoots and kills three would-be kidnappers and wounds a fourth. He now must find out who might want to kidnap someone working for the Central Intelligence group (DCI) all the while trying to fight for the survival of his fledgling agency against a bureaucracy determined to wrest control away from him and into their own agencies.

The plot of this book can be broken down into this simple formula: A woman is almost kidnapped; she wounds one. A U.S. officer is kidnapped. A trade for prisoners is conducted.

What happens in the other 440 pages? Meetings, some subvert and others overt. People get together to talk about what they know about the formation of the DCI, what they know about Cronley’s past, and try to figure out what they should know about the U.S. intelligence machinery post-WWII. There are some meetings where Cronley tries to sort out a plan for dealing with their would-be kidnapper, a plot to overthrow the Nazi ratline called Odessa, and how to get the kidnapped Colonel back from the NKGB.

While this may sound like incredible drudgery, Griffin and Butterworth turn these into tense, page-turning scenes pitting rival agencies against one another against the veil of secrecy in dealing with former Nazis. A few plot holes left me wondering, especially why General Gehen didn’t have a look at their prisoner until the last couple pages—but then again, if he had, the book would have been over at the start.

Burdened with a plot, the book really shines in its interpretations of the power struggles that accompanied the birth of the CIA and how the United States handled both former Nazis and the rise of the KGB.